Today, I turned on the local public radio station expecting to hear Fresh Air but instead I heard the impeachment trial. Listening to a bunch of knuckleheads argue back and forth does not interest me so I am now tuned over to 91.1 where our public radio alternative music station lives.

No matter what I am tuned to, this radio has fantastic audio. 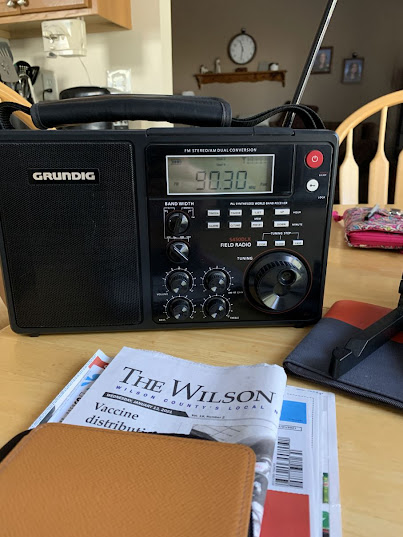 My Radio Shack Pro-405 Scanner is one of my four scanners. I will get around to writing about the others here eventually.

Most of what I listen to is paramedics, airports and airplanes. Pretty much everything else is digital now and older scanners like the ones I have won't pick up the digital signals.

I don't listen to scanners every day but when I do, I turn them on and let them run in the background. It's interesting to hear what is going on around us and sometimes a transmission pops up from one of the warehouses nearby. If pallets being moved excite you, this is the hobby for you!

I also like that this scanner has the SAME function so the weather radio alarm only goes off for the counties programmed in it. Finally, dig that cool orange display backlight. 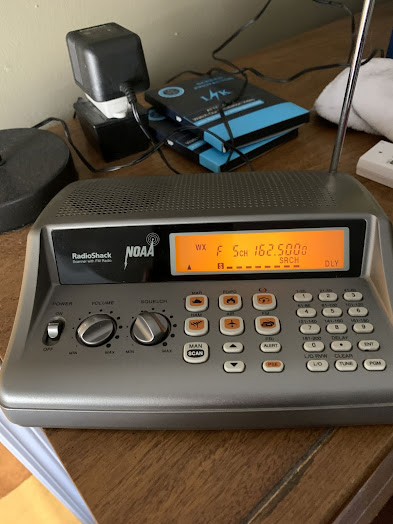 Note that the manufacturing year is 2009. This scanner still looks and operates like new. 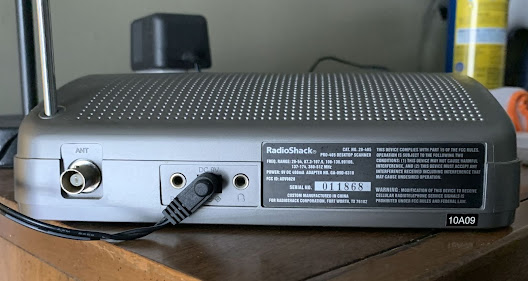 Here's a bag that I love. It's a bit bigger than the OutdoorMaster Sling Bag which is the bag I use the most. I use the Swissgear 1651 City Pack Backpack (item number SA 1651) when I need to take some books and other items with me and I don't want to stuff the sling bag full.

Today, I had some stuff I needed to work on in the car while my wife took on the role of chauffeur so I packed the bag this morning and took a few pictures before we left.

Before you read on, this is a great bag. It's one of my favorites of all time. And you know I've had a lot of bags.

Here is the bag. It's an older version of the SA 1651 so this color scheme is no longer available. I bought this in orange because the inside is orange and that makes it super easy to find stuff in the pockets. Also, this is not a wide bag so it has a tablet pocket but no dedicated laptop pocket. Anything over a 13.3 inch laptop probably won't fit and you won't have a lot of protection if you try it. 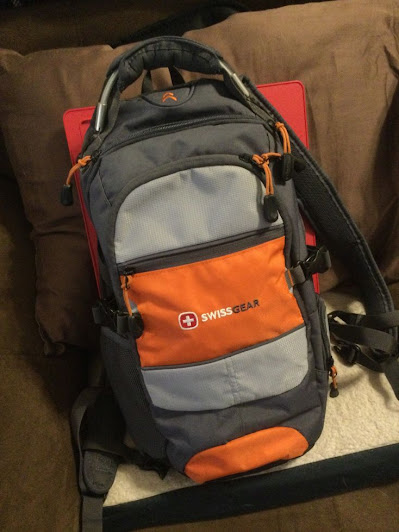 It's perfect for books and look at that first book I took today - I know the author! 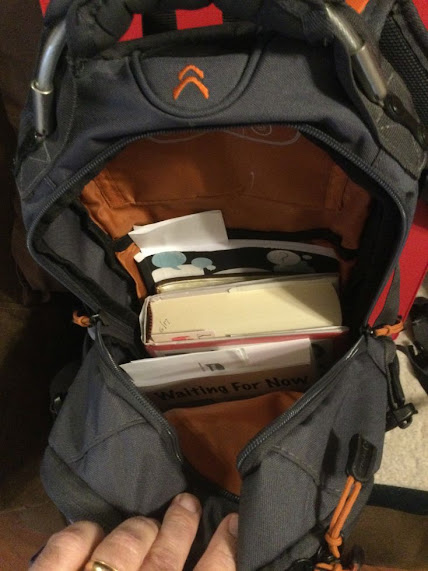 The front organization pocket has 2 pen slots. I love that. I think 2 should be the minimum for any bag. 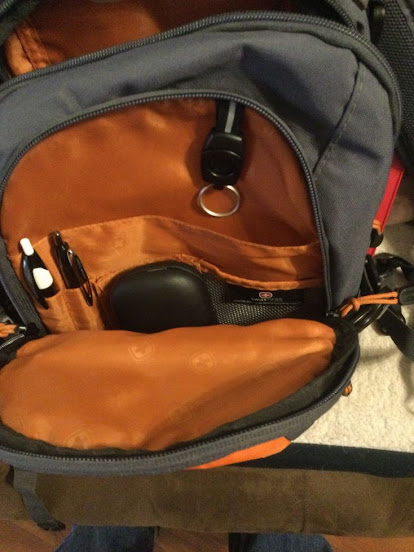 There are more pockets but I didn't take many pictures. There is also a water bottle pocket on one side. 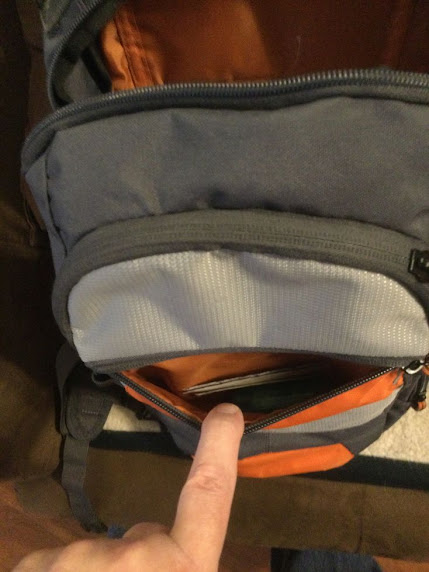 For day trips, if I want to take a few more items than I normally would, this is the PERFECT bag. I love it. I also love that it is a backpack and not just a sling bag so we have two straps instead of just the one. It is fantastic. A+!
Here is the bag with the lap desk I found years ago at Big Lots, I think. It's perfect for getting things done in the car. 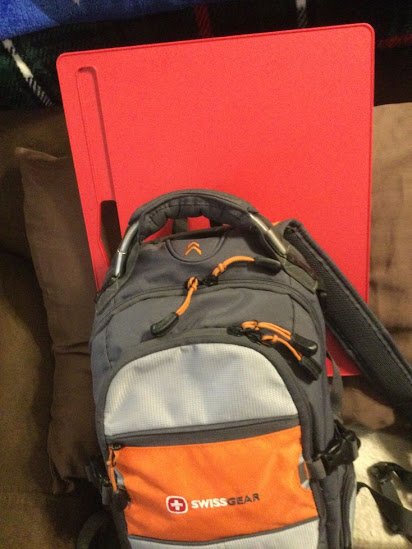 I keep thinking back to the Christmas Eve post I wrote about my Swissgear 2789 Laptop Backpack. Why? Because I don't like what I wrote and I don't like how I wrote it. In fact, I am deleting that previous post.

I dogged the bag for being too expensive (I paid $10 plus shipping for this backpack which retails for $49.99 on Amazon and on the Swissgear website) and for having no support structure.

The first point, about the price, I think is a valid point. At a retail price of $29, I think this backpack would be a huge value. At $49, I think you would be spending too much.

The second point, about the structure, is not a valid point. There is nothing wrong with the bag if you understand what the purpose of it is so let's take another look.

It's a nice looking bag. There is something I really like about the two-tone look. 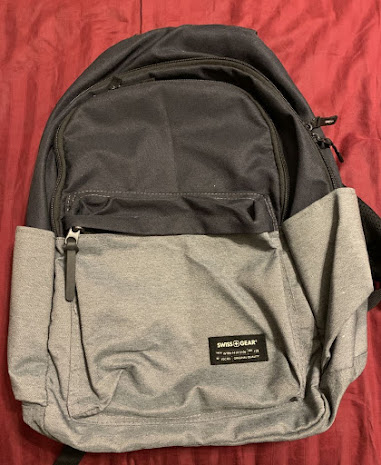 It is comfortable with very well-padded straps and the Airflow back panels. 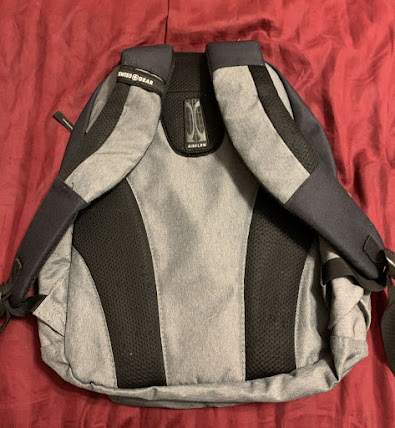 It features a nice big pocket on the front for quick access to items like sunglasses or chargers. 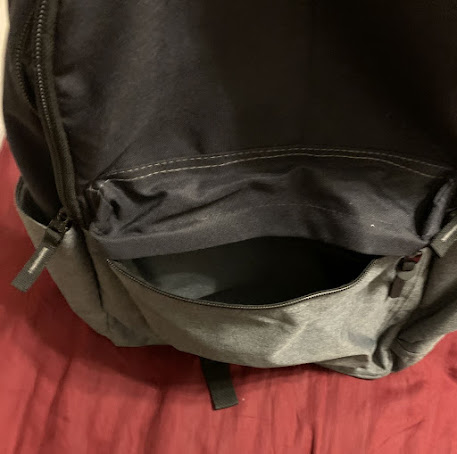 It has a basic but functional and organization pocket that is a light color so you can see what you are doing. There is one pen slot. 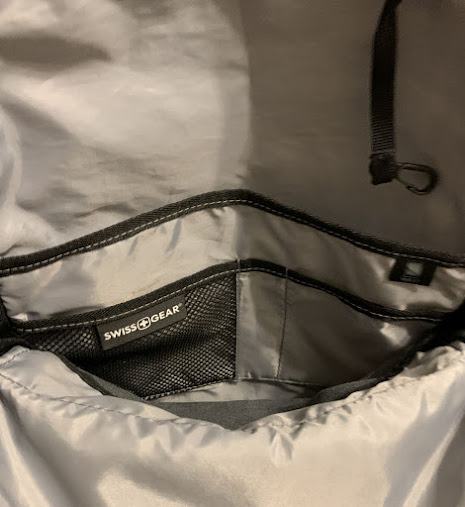 In the main compartment, we have a nicely padded laptop pocket. It is elevated off of the bottom of the bag so it adds protection there. It fits my 13.3 inch laptop perfectly. You might be able to stuff a bigger laptop in there but I wouldn't. The bottom of this big compartment has zero padding but this is a backpack geared towards students and you don't need a ton of padding when you have filled the backpack with books and binders. 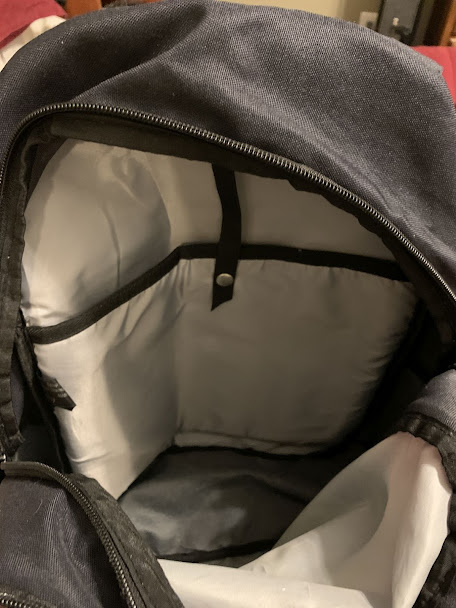 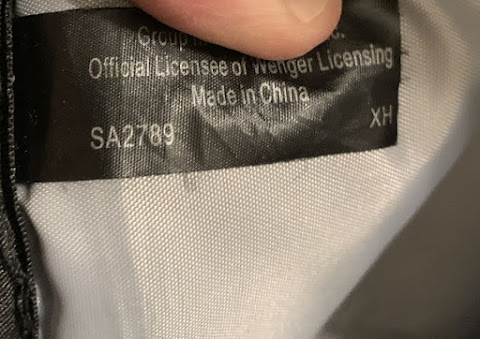 I listen to my radios all the time and I'm going to try to remember to share a bit about that moving forward so here's my favorite all-around radio, my Grundig S450DLX, on the kitchen table this morning tuned to the local NPR station so I can keep up with the latest craziness happening in D.C.

This radio has a great sound and the batteries last forever. It lives on a table next to the couch so I can sit down and tune through the shortwave bands for a station to listen to when I am reading. 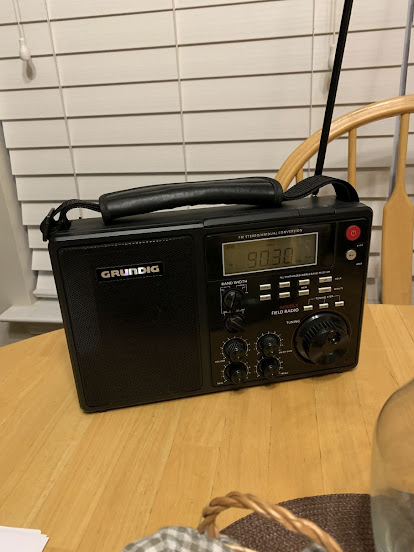 I have tried several audio setups here in the home office over the years. I've used iHome docks and a Sony stereo and bluetooth speakers and smart speakers like the Google Nest Mini and Amazon Echo Dot.

After my end of the year vacation, I decided to go in a different direction. Since several of the radio stations I listen to are on HD subchannels, I wanted that capability but the speaker on the Sangean HDR-14 is not fantastic. And I also wanted the ability to plug in my iPhone to listen to podcasts as needed.

So I went up in the attic and pulled out my old Logitech Z323 Speaker System and hooked it all up.

The Sangean HDR-14 has an excellent FM receiver picking up HD channels and fairly weak FM analog channels with ease and it sounds great through these speakers. 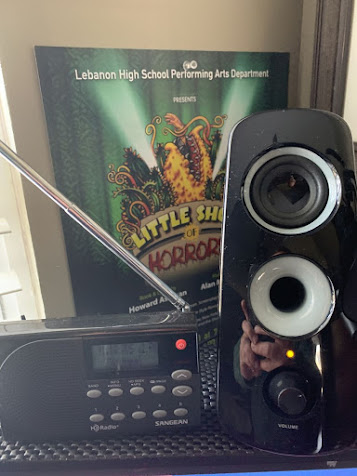 I have the left and right reversed due to the setup of my desk. The french fry hand sanitizer holder is available at Bath and Body Works if you need one. 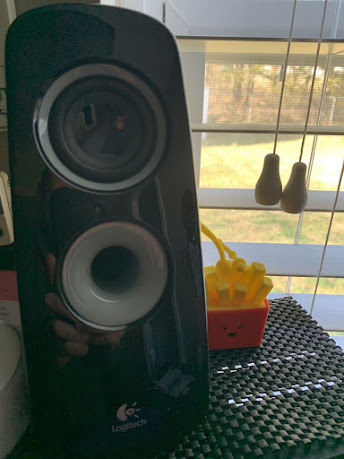 The subwoofer lives on the floor down with the corgi hair which gets vacummed up almost every day but just keeps on coming. He sheds like crazy. 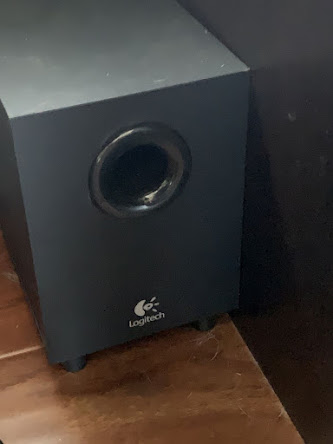 Another radio I own is the Grundig G5. I hate to admit it but this is my third one of this model if I include the two Eton E5 radios I owned over the years. It was part of my former habit of selling off radios when I had not used them for a while. I hated to leave items sitting around unused so I would sell them on eBay (typically for a healthy profit) but down the line I would realize I had made a mistake and purchase the same model again after looking on eBay until I found a deal.

This Grundig G5 was a deal. I think I paid around $30 for it shipped because it suffered so badly from the Grundig sticky funk that occurs over the years due to a terrible design decision Grundig made to coat their receivers in this weird rubbery material that eventually develops adhesive properties due to exposure to humidity. This can be cleaned off with adhesive removers but it is a painstaking and imperfect process. 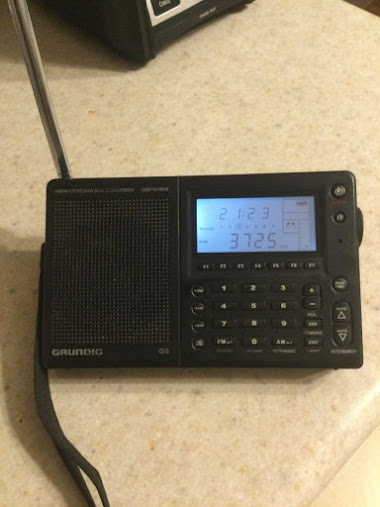 I cleaned this one up as well as I could and that means the finish is not great and some of the writing came off the radio. Also, being a G5 and not an E5, this model does not feature lighted keys which truly makes me miss my E5. I am such a dummy! This is why I no longer sell off radios. If it makes it into the collection, it stays in the collection unless it dies or several years pass with it being in storage. 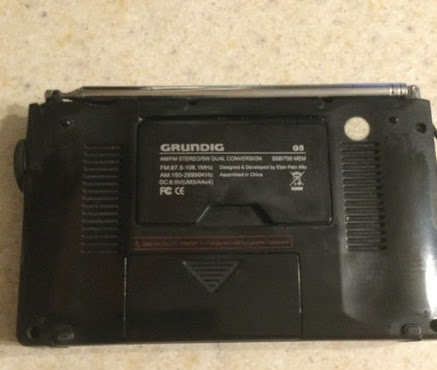 This radio had been in storage for a few months until I recently decided to get it out and compare it to my Tecsun PL-660 on SSB reception. I have found that the Tecsun has a heightened noise floor that can make listening to shortwave fatiguing after a while and I wanted to see if the Grundig suffered from the same issue.

It does not but it is quirky in its own right. For one, the audio is more pleasant but seems weaker. Also, I find SSB a bit more difficult to adjust on the G5 than on the Tecsun because the Tecsun has a button to switch between LSB and USB while the G5 has a true BFO dial meaning it takes very little movement to totally mess up the signal you are trying to hear.

If this all sounds like a foreign language, my apologies. It's taken me years to get more into SSB listening and that is happening now due to there being little else to listen to on shortwave.

For now, the G5 is getting a bit more use than the Tecsun due to how much lower the noise floor is on the G5.

I have considered selling both and getting a newer radio to see if there is any improvement but the options are limited. There is the Eton Executive Satellit which is the modern version of the G5 and I had that at one time and sold it for a crazy profit because I could not stand the display. It was so bright that it hurt my eyes thanks to my weird eyesight issues with light. There is also the Tecsun PL-880 but I don't like the new lithium batteries Tecsun seems to love so much these days. So, I will most likely just stick with the G5, an oldie but a goodie!

This site is part of the Up In This Brain! webring